Tatiana Montabello was hired as Diamond Peak’s new Rental Shop Manager this fall after serving as the Rental Shop Assistant Manager for the past two seasons. Be sure to look out for her smiling face this winter if you ever need to rent ski/snowboard equipment or have any work done on your gear in our Repair Shop.


I grew up in Mendocino, California, and spent most of my childhood on the beach or running around in the redwoods. My family moved us to Reno, Nevada where I attended high school, after which I went on to begin training as a manicurist in the beauty industry. I was blessed with my daughter in 2009 in Reno and then went on to complete my apprenticeship as a manicurist. I have worked at a variety of spas during the last 10 years in Oregon, California and Nevada.


I started my wellness journey in 2012 when I obtained my teacher training certification for Yoga. I continued my education in meditation and mindfulness at The Buddhist Temple and other programs around Northern California.


After living in Portland, I decided to give Tahoe a try, and I have been in Incline Village for six years with my family. While living in Tahoe I completed my Level 1 & Level 2 in Reiki, energy healing, and received my certification for Aromatherapy. Shortly after that I took a year off after having my son, who is now 3 1/2. I then created a small Holistic Spa Treatment and Wellness space in Crystal Bay which resulted in an unforgettable growth of experience, but ultimately I decided to move on to have more time with my children.


Since then I have continued to commit myself to Diamond Peak with a bunch of awesome memories... I had really never been around a ski resort much prior to my time here at Diamond Peak, which started five years ago. I started here in the Rental Shop as a Rental Tech/Cashier in 2015, then got promoted to Lead Cashier for the POS stations in 2016. During my third and fourth seasons I was promoted to Assistant Manager which led me to my first season as Rental Shop Manager this year.


Diamond Peak has been an awesome family mountain for me and my family throughout the years - my daughter started snowboarding here when she was 5 and is now on her second season with the snowboard team at Northstar. My son will be hitting the mountain for his first year this season as well! I feel blessed to be a part of the operations here at Diamond Peak and to continue to live and work in the most beautiful place I have ever been.


This article originally appeared in the December 2020 IVGID Quarterly Magazine.

Back to all news 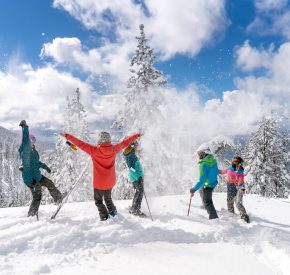